Bus Driver Loses His Job For Running Over A Snow Man!

Professor Wafaa Bilal Embeds A Camera In The Back Of His Head!

Professor Wafaa Bilal Embeds A Camera In The …, posted with vodpod

The reality show filmed by
Shaquille and Shaunie O’Neal before
their marriage took a decisive turn
last week may find its way to at
least one network still willing to
give it a chance. A&E still
considering whether to purchase the
show filmed before last week’s turn
of events.

Chris Brown got an earful of
judgment from a woman during a
public promo appearance in New York
last week. Whe woman shouted ‘I
hope someone beats the f**king crap
out of you!’ 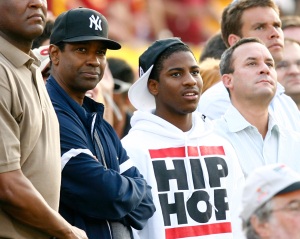 As Malcolm Washington suited up for
his first game with the University
of Pennsylvania basketball team
Friday night, his dad, Denzel, sat
three rows behind the bench
cheering him on.

LEBRON MAY SWITCH JERSEY NO. TO
HONOR JORDAN

He has worn #23 in honor of NBA
legend Michael Jordan since his
high school days, but now,
Cleveland Cavaliers star LeBron
James says he and everyone else in
the NBA should give up the number
out of respect to His Airness.