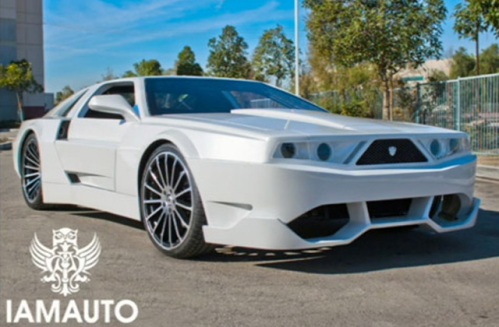 The Black Eyed peas frontman debuted the vehicle on The Tonight Show With Jay Leno. The auto was developed to help create jobs in his old Los Angeles neighborhood. See, there are more ways to make it out the hood than sports and entertainment.

“I’m a big technology freak and a geek and I invested my money in building my own vehicle ’cause I want to bring jobs to the ghetto that I come from.  I invested in making a demo to start the Black Eyed Peas, now I want to invest to have a car company in the neighborhood where I come from.  It’s sick, it’s really fresh.”

The car, which looks a lot like the Delorean from Back To The Future, features a Beats By Dre sound system  and was constructed using OEM parts from Chrysler.

Kanye West & Fergie Performs ‘All Of The Lights’ @ SWU Festival In Brazil!

Tagged as Avril Lavigne, B.O.B, Black Eyed Peas, Jessie J, Keri Hilson, Lupe fiasco, Lupe Fiasco Ft. B.o.B. - "Who Are You Now", Nothin On You, Video, Who Are You Now

A dead broke George Clinton is suing pop band The Black Eyed Peas for allegedly stealing a sample of his classic hit, “(Not Just) Knee Deep.” The suit claims that the song was used in their 2003 hit single “Shut Up” and he’s asking for a whole lot of money.

The recording industry can be treacherous for new artists. Record labels and crooked managers often prey on the uniformed. However, if they are lucky enough to survive those initial years in the business and get out of bad contracts – artists generally gain a lot of valuable knowledge, and should fare much better in future deals.

Fergie of the Black Eyed Peas is an exception to that rule. Although we haven’t heard about her having to deal with bad contracts yet. The singer admits that after 26 years, she’s learned next to nothing about the business side of the industry. Instead she relies on her parents, lawyers and a therapist to insure she doesn’t get taken advantage of.

“Well, I’m still learning about the music business because it’s changing. There are all these different things coming up because of technology. It was a different world back then; it was very straight and simple: You got a record deal, you made an album, you got new fans. Now it’s all these 360 deals and all these different… You know what? The business side of it? That’s not my cup of tea. Will.I.Am’s great at it. He thrives on it. It’s just not my personality. I want to get straight to the art. The other part of it? I have my business team explain it to me. I actually have conference calls where I have my mom and dad on the phone, my accountant, my lawyer… Once in a while, I even have my therapist on these calls,” she told Billboard

I’m not kidding. Because there’s so much smoke… I’m very cut to the chase; that’s my personality. I don’t like to speak in circles. So when people do that I’m trying to find out, “OK, guys, what are we really talking about here?” So my therapist listens in. Because it’s very important to make informed decisions. I can be very impulsive, which is great as an artist but not as a businesswoman. So I have to slow down and surround myself with a great support team. So that’s what I’ve learned, that I need to surround myself with a team that can help me. It’s part of knowing that you don’t know it all.”

Hopefully Fergie’s people are looking out for her best interests. I’d hate to hear about her being broke in the future because of mismanagement.

WILL.I.AM GETS A NEW JOB

Black Eyed Peas producer and group
leader, Will.i.am has been
officially named the director of
the Grammy Foundation.

In this week’s Sales Wrap, Michael Jackson returns to become the king once again, Jay-Z holds down Top 10 and new releases from Tech N9ne, Z-Ro, Triple C’s and more debut on the charts.

Proving his memory still carries on, the late Michael Jackson’s This Is It soundtrack managed to debut at No. 1 this week. According to Nielsen Soundscan, the iconic singer’s compilation disc moved 373,800 records after seven days in stores.

Grammy-winning rapper Jay-Z’s The Blueprint 3 took a slight six-position dip but managed to land at No. 10 with 40,700. After two months on store shelves, Hovi’s 11th number one album has sold 1,200,100 pieces to date.

Rap veteran Tech N9ne‘s K.O.D. debuted onto the charts this week securing a spot at No. 14. Tech’s new album was able to push out 29,900 records after seven days in stores.

R&B singer Brian McKnight made his return to store shelves as Evolution Of A Man opened at No. 20. Headed into just his second week, the singer’s latest effort has generated 24,400 sold discs.

Award-winning singer Whitney Houston‘s I Look To You dropped ten spots to No. 30 with 15,200. After nine weeks in the books, the singer’s comeback album rests at 765,500 secured units.

Renowned singer Mariah Carey‘s Memoirs Of An Imperfect Angel took a slight hit dropping 17 slots to No. 31 with 14,900. Nick Cannon‘s wife has been able to move 290,400 records after five weeks in stores.

Rick Ross and Triple C’s Custom Cars & Cycles got off to a rough start this week debuting at No. 44. With seven days in the books, the group’s debut Def Jam release has sold 12,100 records.

The late Michael Jackson compilation disc, Selections From Michael Jackson, also debuted onto the charts at No. 91 with 6,100 sold records in its first week.

Canadian hip-hop group Swollen Members‘ Armed To The Teeth debuted at No. 146 this week moving a total of 3,500 records after seven days on store shelves.

Texas rapper Z-Ro’s Cocaine also debuted onto the charts landing at No. 147 with 3,500 pieces to his name heading into week two.