A new book by former LAPD homicide detective Greg Kading entitled Murder Rap, alleges that both Diddy and Suge Knight had a part in the murders of  rappers Tupac Shakur and Christopher “Biggie Smalls” Wallace.

Famous Quotes: “Uhhn”  ”If You Don’t Know Now You Know”  ”Biggie Smalls is the illest”

Did You Know: Big had to change his name from Biggie Smalls to The Notorious B.I.G. because another unpopular(who happened to be white) artist had that name already, The Name Biggie Smalls originally came from a 1975 Sidney Poitier, Bill Cosby film Let’s Do It Again, and was their 2nd film together. His name Frank White came from the movie “King of New York”  starring Christopher Walken, Larry Fishburne, Wesley Snipes, and David Caruso, BIG was considered not just the “King Of NY” But the “King Of Hip Hop”.

I don’t know about you, but B.I.G. change my Music taste forever!, It might be because I’m from Brooklyn, but there Was NO Rapper at the time Or Ever that could have touched him, even to this day his songs can play amongst the most popular Music, and sound better!! Frank Wza was cut down at the young age of 24 in L.A., Now March 9th will forever live in our minds as one of the worst days in Hip Hop. The Greatest The Rapper Ever……

Jay-Z Spoke To Biggie Before He Died! 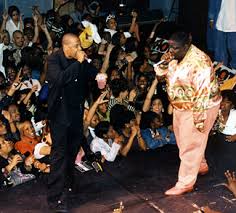 The husband of Beyonce Knowles reveals that the rapper known as Notorious B.I.G. told him ‘he felt like he finally was back in Los Angeles and everything was where it was supposed to be’.

Jay-Z spoke with Notorious B.I.G. an hour before he was gunned down and killed. The two New York rappers were friends in the early 90s and Jay revealed he talked on the phone with the “Mo Money Mo Problems” rapper just hours before he was fatally shot in Los Angeles in 1997.

B.I.G., whose real name is Christopher Wallace but is also known as Biggie or Biggie Smalls, was embroiled in a bitter war between rappers from the East and West coasts of the U.S. at the time, which had started to spill over into gang related violence, and he is suspected of being gunned down by a gang member.

“He wasn’t a troublemaker at all,” Jay said when speaking about Biggie at the launch of his new book, “Decoded”, at the New York Public Library. “He was just a funny, charismatic guy. For him to die so senselessly – I spoke to him that night, and he was so happy to be in Los Angeles, after the whole East Coast-West Coast thing.”

“He felt like he finally was back in Los Angeles and everything was where it was supposed to be. He loved being in Los Angeles – and we see this happen in movies – when everything is just fine, and we hung up the phone, and one hour later, he’s no longer with us.”

“Girls, Girls, Girls” rapper Jay has also recently explained how one of the reasons he wrote “Decoded”, a collection of autobiographical writing, pictures and heavily annotated lyrics, is to explain the messages his words convey plainly for people. He told MTV News, “A lot of people listen to music, but they don’t really listen to it. You may know the words and you may bop your head to it, but you don’t really understand what you’re singing.”