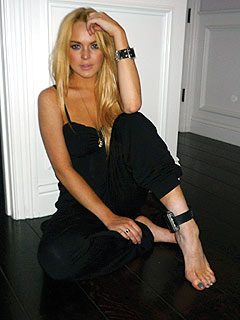 Lindsay Lohan isn’t going to let a little thing like an alcohol and drug monitoring device get in the way of her night life, that’s for sure. Nope, she wore her SCRAM bracelet out clubbing last night in L.A.

With her newly blonde hair, the starlet hit up Las Palmas in L.A., sporting jeans and a fedora. Giggling and chain-smoking throughout the night, Lohan avoided alcohol and stood at the center of attention with her group of friends. Lohan also danced around her table, singing along to Britney Spears songs during the spirited night out.

And she’s already asking for some decorative Chanel stickers to go on the bracelet, too. She’s crazy if she thinks Chanel wants to be associated with her craziness. She tweeted that she was looking for some stickers so that she could wear a chic dress with her ankle wear.

Lovely. This girl is so self-entitled, it’s amazing. How long do you think before she’s in jail for violating the terms set by the court? I give it a week or two before she’s crying in the back of a squad car ala Paris Hilton.

Tagged as Lindsay Lohan Wore Her SCRAM Bracelet Out Clubbing In L.A.

The four days of violence that have
engulfed Jamaica’s capital city
have now claimed at least 73 lives
as police try to flush out a
notorious drug lord. What started
as a police operation with more
than 2,000 officers and soldiers on
Monday has turned sections of
Kingston into a barricade-ridden
war zone, with residents trapped in
their homes hoping to avoid the
gunfire. Most of the dead are young
men, supporters of Christopher
“Dudus” Coke, who is wanted in the
United States on drug and gun
charges.

Tagged as DEATH TOLL IN JAMAICA DRUG BATTLE OVER 70

more about “Dude Gets Knocked The F*** Out & Robb…“, posted with vodpod

No shots were fired during the incident Friday at a bank near Najaf, the Interior Ministry said. The money is the equivalent of 6.5 billion Iraqi dinars.

In recent months, there has been a spike of similar incidents and authorities believe that insurgents were behind them to fund their military operations

Earlier this week, 15 people died in southwestern Baghdad after a brazen series of jewelry store heists on Tuesday in which bandits made off with gold and money.

In this latest incident, robbers had an associate among the bank’s guard force give drugged tea to the guards, officials said.

After the guards passed out, the robbers entered the bank and made off with the money.

Two people were arrested, but police were not able to recover any of the money. The Interior Ministry said it appears the two are poor people trying to make money and are not part of a terrorist organization.

Members of the bank’s guard force are being investigated, the Interior Ministry said.

Los Angeles – Beyonce and a video producer were sued Friday by a man who says access to his Mt. Olympus home was blocked for hours during a video and still photography session for the R&B singer/actress.

Philip Markowitz is seeking unspecified damages from the singer and producer Dina Ciccotello on private nuisance and trespass allegations.

A representative for Beyonce was not immediately available for comment on the Los Angeles Superior Court complaint.

According to the suit, the video shoot for the Beyonce song “Why Don’t You Love Me,” with a crew of about 30 people, took place March 26, beginning about 7 a.m. and lasting until 11 p.m.

The plaintiff said the activity made it difficult for him to come and go, and he had to get an off-duty officer to “guide him past the obstructions.”

The plaintiff says he was “disturbed all day with noise and his dog barking at the crew while they trespassed on his driveway.”

Markowitz says that when he demanded compensation for his inconvenience — he had previously received $10,000 for use of his property — Ciccotello told him the shoot had a low budget and the payment could only be approved “in concept.” MyFoxLA.com

Havoc: “If You Haven’t Gotten On & You Past 30, Try Something Else”

more about “Havoc: “If You Haven’t Gotten On & Yo…“, posted with vodpod

Tagged as Havoc: "If You Haven't Gotten On & You Past 30, Try Something Else"

more about “The-Dream Announces His Retirement“, posted with vodpod

Tagged as The-Dream Announces His Retirement

After being admitted to a hospital on Wednesday for a head injury from a fall, Gary Coleman died on Friday. His wife, Shannon Price and her father were at the hospital with him.

Coleman, 42, became a star after “Diff’rent Strokes” debuted in 1978.  In the show he was the younger brother of the two African-Americans which were adopted by a wealthy white man. When the showed ended after six seasons on NBC and two on ABC, his popularity faded.  In recent years he had a lot of legal problems and also ill health from a kidney disease which was also the reason for his stunted growth.

His mother, Edmonia Sue Coleman according to a 1979 Los Angeles Times profile, said that her son had always been a ham as a small child.  Along with this natural comedic nature he also had a  unbelievable power of concentration that helped him to remember everything so much that at ten years old he learned and remembered his lines easily.

“Avenue Q,” which won the Tony Award for best musical in 2004 has also included a character called Gary Coleman since its debut.  The character in the musical identifies himself as a former child star who “made a lot of money that got stolen by my folks.”  The show’s creative team stayed in contact in the days between Mr. Coleman’s hospitalization and his death.

Coleman was born near Chicago on Feb. 8, 1968.  His kidney disease was diagnosed when he was 2 and he underwent his first transplant at five years old.

Dennis Hopper, the hard-living Hollywood icon who directed and starred in the classic “Easy Rider” before sobering up for an acclaimed second act in a remarkable career, died Saturday.

The actor, whose critically-hailed performances dated back to “Rebel Without A Cause” opposite mentor James Dean, died of complications from prostate cancer at his Venice, Calif., home.

He was 74. Hopper – who was in the middle of a contentious divorce with his fifth wife – was surrounded by family and friends, according to Reuters.

Hopper earned a pair of Oscar nominations that reflected his wildly disparate talents: the first for co-writing 1969’s cult classic “Easy Rider,” and the second for his portrayal of an alcoholic hoops coach in “Hoosiers” nearly two decades later.

The latter role came after Hopper, one of Hollywood’s most unremitting drug and alcohol abusers, beat his addictions and restarted his career – including roles in the quirky “Blue Velvet” and the big budget “Speed.”

The movie also starred an unknown Jack Nicholson as a hard-drinking attorney. Across his five-decade career, Hopper also starred in Francis Ford Coppola’s “Apocalypse Now” as a demented photographer and in “Giant” opposite Dean.

He directed the Los Angeles gang movie “Colors,” starring Robert Duvall and Sean Penn – who was so impressed that he later named his son Hopper.

The veteran actor first fell ill last September, but continued working on the cable television program “Crash” despite the cancer.

The counterculture hero received a star on the Hollywood Walk of Fame just two months ago.

Is This Proof That Kat Stacks & WorldStar Are Setting Rappers Up?

According to this Kat Stacks is setting up folks and getting paid to do it. Does this change your opinion on her getting smacked up? The blogger Jozen Cummings says here : As much as we all probably agree beating on a woman is wrong, this video (which we will not show on the site) shows for some men, there is a line to be drawn. What this video is saying is at some point, it is actually acceptable to go upside a woman’s head with an open hand, and that point is usually dictated by a woman like Kat Stacks.

To let people of the world who know about her tell it, Kat Stacks is every indecent thing we can call women all rolled into one. She’s not a woman who deserves to be treated with any sort of decency. Someone did need to smack her. Someone did need to teach her a lesson.

And if you are one of those people nodding your head in agreement to any of this, you should probably be smacked just like Kat Stacks.

Tagged as Is This Proof That Kat Stacks & WorldStar Are Setting Rappers Up?

Kat Stacks Gets Her A** Slapped In Atlanta….

more about “Kat Stacks Gets Her A** Slapped In At…“, posted with vodpod

Tagged as Kat Stacks Gets Her A** Slapped In Atlanta

In the name of Rosa Parks, Kanye
West insists that artists boycott
Arizona over its controversial new
immigration law, which makes
failure to carry immigration
documents a crime. The rapper is
supporting Rage Against The Machine
frontman Zack De La Rocha, who is
spearheading the campaign against
Arizona’s recently passed law.