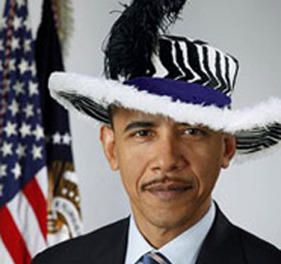 A tea party group in Houston known for being a racist group of Obama protesters is circulating emails of President Obama dressed like a pimp.

The TeaParty.org group is drawing criticism after its founder Dale Robertson sent a fund raising email with a headline that read, “Obama Pimping Obama-Care, One Last Time!“, as well as a picture of the President dressed like a pimp.

If there was any doubt that Robertson and his klan were racist, the founder was previously pictured holding a sign that called taxpayers “niggars.”

Since his ridiculous actions several other tea party groups have distanced themselves from him.